Local municipalities have the responsibility to manage the supply, while the Environmental Protection Agency monitors public water systems to ensure your tap water meets the enforceable standards set. In theory, this means all tap water has been treated. While your tap water may not be entirely contaminant-free, it should not contain a level of contamination that could pose a threat to human health. Further, if a water company becomes aware of potential contamination, or a violation of EPA water standards, the supplier has to inform customers within 24 hours. Plus, the supplier has to suggest alternative ways to get drinking water, which could include buying bottled water or boiling your tap water before use.

According to the EPA, safe drinking water is a supply that does not exceed pre-defined levels of specific pollutants such as lead and arsenic, nitrates, or pathogens — thus, making it safe for human consumption.

In the USA, we have a ‘right to clean drinking’ water as articulated in the Clean Water Act of 1972. The act established a basic framework that regulates the emission of contaminants into local waterways to keep regional water supplies clean. The Safe Drinking Water Act of 1974 set the maximum levels of pollutants allowed in the public water system to keep it safe: with the act including minimum standards to protect tap water sources while requiring all suppliers of municipal water to comply with the health-related guidelines. The EPA sets a rigorous testing schedule to monitor drinking water quality. Suppliers must share an Annual Water Quality report by 1st July each year. 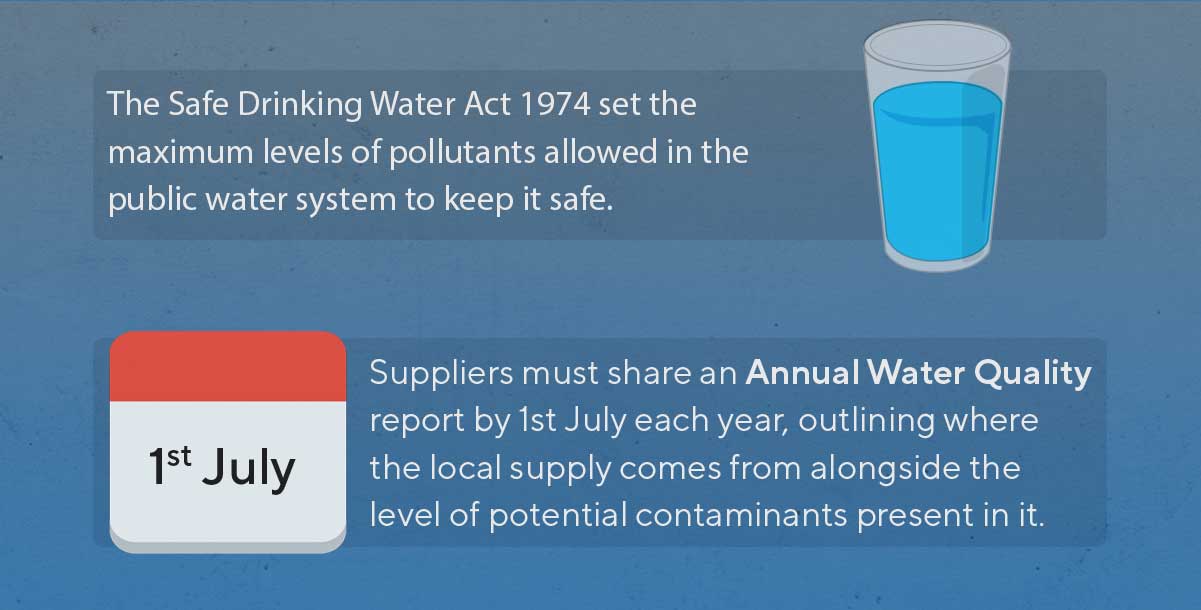 Where in the USA is tap water unsafe to drink?

As recently as 2017, the Pittsburgh Water and Sewer Authority had to issue a ‘boil your tap water’ advisory after regulators discovered a risk of giardiasis: a parasitic infection that causes diarrhea, abdominal cramps, and nausea. The warning meant that everyone had to use boiled water, whether for drinking, brushing their teeth, even doing the dishes.

Aging infrastructure led to a widespread water crisis in Flint, Michigan, in 2014 after the city switched its drinking water source to the Flint River. Residents reported the water suddenly had a foul color, smell, and taste. When the EPA tested the supply, it discovered dangerous levels of lead that had leached from corroded pipes. Flint officials have declared the local supply as safe for consumption. However, the ongoing presence of lead piping in the water network has left many locals doubting whether the water supply is really suitable to drink.

At least one water supplier in nearly two-thirds of California’s 58 counties violates state water standards. The California drought has dried up wells, forcing providers to pump groundwater and causing arsenic to find its way into local water supplies. In Dos Palos, California, a separate issue has arisen. Regulators have discovered unsafe levels of trihalomethanes in the water supply, which can cause kidney problems, leaving residents with no choice but to drink bottled water.

The EPA reports up to 95% of local water systems comply with national regulations. However, contamination at a local level happens frequently and bacteria are often found in water supplies, which can lead to waterborne disease resulting from inadequate treatment. Research estimates that upwards of 32 million cases of waterborne disease happen in the United States every year, which illustrates the scale of the risk of an unsafe tap water supply. The next time you feel thirsty, you can likely feel safe pouring a glass of tap water. The key takeaway is that localized contamination is an ever-present risk. By staying aware of regional water alerts, you’ll be first to know should your local tap water supply become unsafe.

What employees expect from workplace hydration