Americans drink more than 1 billion glasses of drinking water per day. We take the colorless, odorless liquid for granted, but it’s a remarkable substance. It composes 60 percent of our bodies and it makes the basic molecules of life, including DNA, cell membranes, and proteins, work.

More than 780 million people around the world lack access to clean drinking water. And clean water is a relatively recent luxury in North America. In 1908, Jersey City, NJ was the first city to disinfect their drinking water. Thousands of cities followed Jersey City’s lead during the next decade, and the occurrence of waterborne diseases such as cholera and typhoid fever decreased dramatically in the U.S.

Today, the majority of Americans have disinfected drinking water delivered to their homes and businesses. But do you know how that water makes its way to your faucet so you can make your morning coffee? Keep reading to find out how water travels from source to tap. 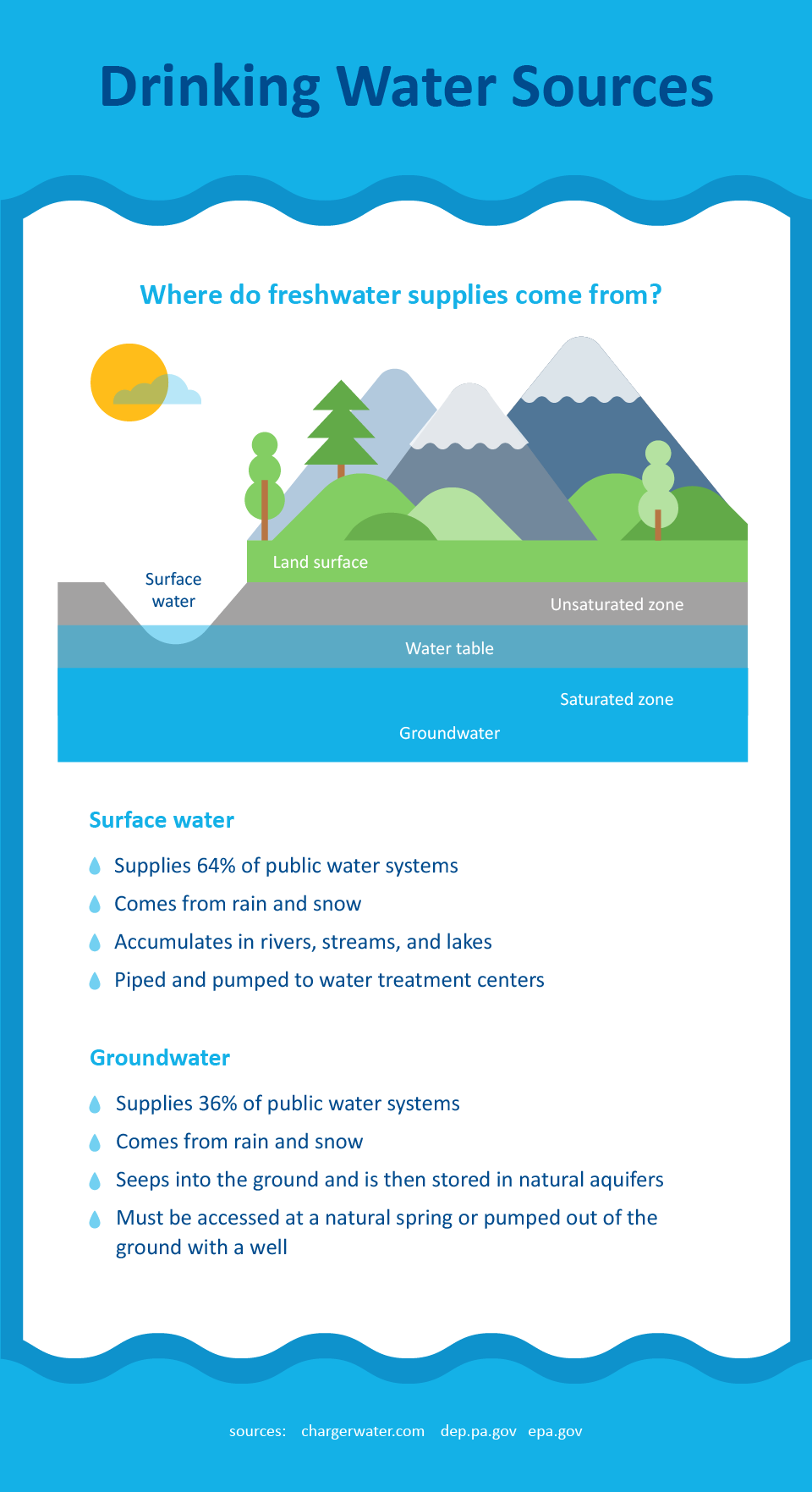 From Source to Tap

The majority of our freshwater supply comes from surface water, which comes from rain and snow that runs off into rivers, streams, and lakes. Those water sources aren’t always nearby. Roughly 90 percent of New York city’s water comes from the Catskill/Delaware watershed, which extends 125 miles northwest of the city. Chicago’s water travels more than 100 miles from Lake Michigan. Atlanta’s water travels a couple hundred miles upstream from the Chattahoochee and Flint Rivers. And people in seven states stretching from Denver to Los Angeles rely on drinking water from the Colorado River.

The rest of our fresh water comes from groundwater, which originates from rain and snow that seeps into the soil. It’s stored in aquifers, natural formations of soil, rocks, and sand beneath the ground. Groundwater is accessed from natural springs or pumped out of the ground by way of a well and is mainly used as drinking and irrigation water. Where the majority of states are mainly supplied with fresh water from surface water sources, Miami, Memphis, and San Antonio draw most of their water from groundwater because these locations have aquifers.

Distribution systems must provide an adequate amount of water, and they must also provide it with sufficient pressure. Without pressure, water stands still.

Water pressure is created by pumping water to the top of a water tower or to a water tank in a high location. When the water descends, it creates force, which in turn moves the water through the mains and pipes. Residential water pressure is usually kept between 45 and 80 pounds per square inch (psi).

The pipes that transport water can be made of several different materials. Some of the most common materials include:

An alloy of iron and carbon, steel is the strongest and most durable material used for water supply pipes.

These pipes have a protective zinc coating to prevent rusting. Once popular, the use of these materials is declining because pipes corrode over time, giving water an unpleasant taste and smell.

This iron alloy has been used for water distribution pipes for hundreds of years. It’s still used today because it’s incredibly durable.

Concrete cement pipes are still used and tend to be resistant to erosion. Asbestos cement pipes were used in the early- to mid-1900s, especially in the western states. They make up 12 to 15 percent of drinking water systems in the country. Asbestos has been banned in many countries because of concerns about workers breathing it in. Some health experts have also raised concerns about potential health effects when asbestos fibers from old pipes leach into water.

A red-brown elemental metal, copper is lightweight, durable, and naturally corrosion resistant. Copper pipes can leach small amounts of copper into the water. While leached copper is not a health threat for most people, it’s harmful to individuals with certain medical conditions, including Wilson’s Disease.

A rigid plastic, PVC is usually only used for cold water pipes because it breaks down when exposed to heat.

This type of plastic can withstand temperatures up to about 180 degrees Fahrenheit and is used for both hot and cold water pipes.

This malleable elemental metal was used to make and solder pipes until Congress banned it in 1986 to prevent childhood lead poisoning. More than 10 million homes still get their water from older lead water service lines (the pipes that connect main service lines to a house’s plumbing system). 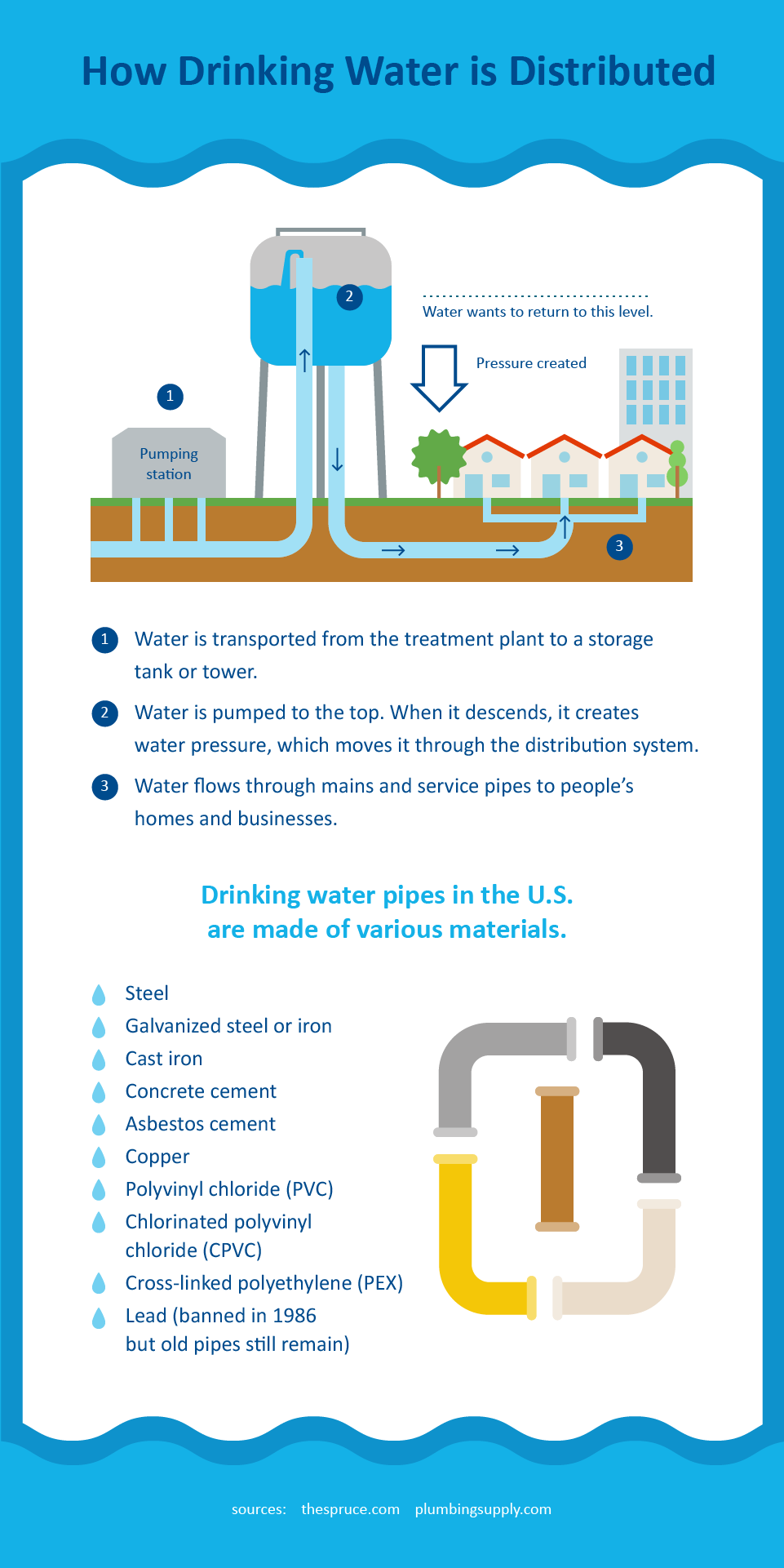 Waterborne illnesses such as giardia, hepatitis A, typhoid, and cholera are real risks for residents and travelers who drink tap water in many parts of the world. In general, the tap water in the U.S. is safe—but American treatment and distribution systems aren’t perfect. (This is evidenced by examples like the Flint, Michigan water crisis.) About one quarter of U.S. residents get their drinking water from sources that violate the EPA’s Safe Drinking Water Standards. Most are in low-income, rural areas. And even if water is deemed safe to drink when it leaves a treatment center, it can be contaminated by pipes in aging distribution systems. Lead can also leach into water inside homes and businesses from old lead pipes or from brass plumbing fixtures made before 2014. Filtering water before you drink it is the best way to ensure your water is clean, safe, and tastes great.

By Abby Quillen in partnership with Waterlogic and Ghergich & Co